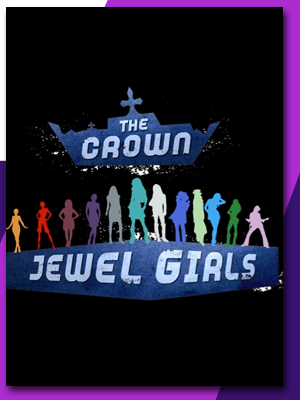 The Crown Jewel Girls are about 12 girls from all over the world who come together to compete on the first worldwide broadcast of Battle of the Bands World Edition. The groups are put together by four music industry professionals in hopes of winning a recording contract and the opportunity to tour with their mentor. The girls and mentors are brought together by the mysterious Executive Producer, Treza Soleil of Kingdom Mandate Productions. The girls soon find out that they are heirs to a lost kingdom. They have to rely on their musical abilities to heal the world and reclaim their birthrights as royalty through learning and love. Not only will the girls have to unlock their hidden powers and protect the world as we know it, but they will also have to deal with the all-too-normal experiences of being teenagers. Though heroic and super-powers, these young women are not immune to human forces of competition and jealousy, love and heartbreak.  Join us as we uncover who we are and what we all can become!

Crown Jewel Girls, Band Together, Save the World!