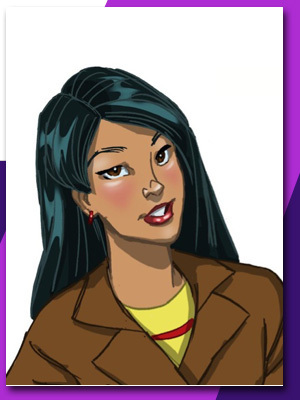 Alexis is one of the mean girls.  The former child star who enjoyed worldwide success and fame only to become a pariah in the industry. She believes that this competition will bring her back into the spotlight. Winning this contest means a second chance of a career, and losing isn’t an option for her. Meeting her bandmate Desi was the best and worst day of her life. It reminded her that there is a reality outside of acting and there may be more to her than she though. She has to learn all over again, how to share the spotlight and a bathroom.  Alexis is an accomplished bass guitarist and vocal soprano.

Alaya is the bane of every boarding school in Europe.  The debutante is a skilled guitarist, vocal soprano and an avid fan of the movie, “Interview with an Vampire”.  She spends thousands of dollars of her family’s wealth on extravagant Victorian themed clothing made for cosplay.  Her parents are industrialist and constantly on the go. They don’t see their daughter often, but have voiced their disdain for her participating on the Battle of the Planet Band Edition through their long suffering accountant, who speaks with Alaya more than they do.  Alaya isn’t serious about the show but because of her competitive nature she can’t come in second. Alaya is an insecure snob who connects with Alexis right away because of her hunger for fame. Yet she will betray her at the first opportunity if it will make her more famous. Alaya is the oldest CJG. She doesn’t feel any sense of camaraderie, so, she feels no responsibility to be a good example.  What will she do once she finds out that she is a royal with elemental power?

A self-taught drummer from the mean streets of Toronto, Desi is tough on the outside but plenty sensitive and sweet on the inside.  Music has been the only outlet for a very chaotic life that has left Desi unable to trust many people. She is determined to make a difference in an industry that seems to objectify women.  She wants to be taken seriously as a musician. After a rocky start with her bandmates, Desi will gradually drop the gruff exterior and learn who she really is and grow. If being a princess means choosing a side in this war against humans, Desi wants to know who decides what’s right or wrong when both sides could end with the human race as a casualty.